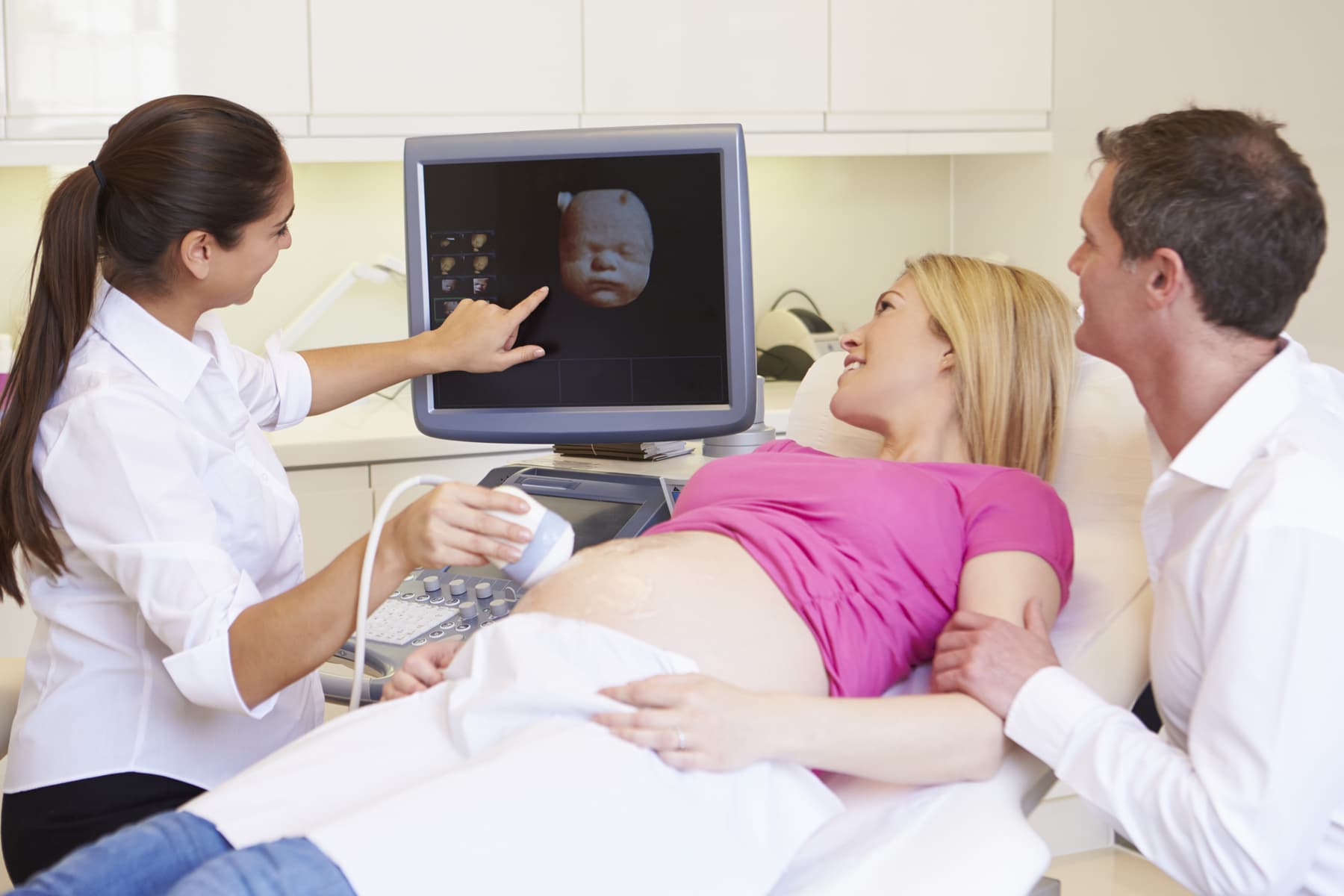 One of the most exciting doctor’s visits for prospective new parents is the ultrasound appointment. It’s the first time they get to see their baby. However, with all the different ultrasound technologies available, it’s hard to decide which type you should get.

A 4D ultrasound is one of the latest and most advanced ultrasound technologies. Visually, it looks exactly like a 3D ultrasound. However, the image is constantly updated, making it appear as though you’re watching a video instead of looking at a still, three-dimensional image.

In this article, I’ll provide you with all the information you need to make an informed decision about whether or not to get a 4D ultrasound. I’ll also highlight the pros and cons of 4D ultrasounds and answer some other frequently asked questions about them. Let’s jump right to it.

What Is a 4D Ultrasound?

Also known as sonography, ultrasounds are an essential component in most medical fields, especially obstetrics. There are three main types of ultrasounds. They are:

Put simply, a 4D ultrasound is a high-quality ultrasound that’s somewhat of a hybrid between the 2D and 3D varieties.

Now, what exactly do I mean by that? Let’s break it down.

A 2D ultrasound is the “old-school” ultrasound most people are used to seeing. It’s one of those flat, white-against-black moving pictures of fetuses that we see in almost every movie about pregnancy ever made. When most people think of ultrasound photos, it’s the 2D version that usually comes to mind.

Even though the technology for 3D ultrasounds has been around since the 1980s, 2D ultrasounds are probably the most well-known and widely used ultrasounds even today (Source: National Library of Medicine)

What’s the Difference Between a 3D and 4D Ultrasound?

Unlike 2D ultrasounds, 3D ultrasounds are three-dimensional. They give prospective parents a more accurate look at what their babies look like. Features like noses, eyes, fingers, toes, and tongues are clearly visible in a 3D ultrasound.

However, the picture is more like a photograph than a video. The image doesn’t move. The sonographer can rotate it, but the image itself stays immobile.

On the other hand, during a 4D ultrasound, multiple pictures are taken in rapid succession. (Imagine the “burst photos” feature on your cell phone; it’s similar to that.) As a result, a 4D ultrasound looks more like a video than a photograph.

Even so, it retains the high-quality, three-dimensional imaging quality of 3D ultrasounds. That’s why I say it’s a hybrid of 2D and 3D. The image quality is fantastic and exactly like what you’d see in a 3D ultrasound. Additionally, 4D ultrasounds share the same video-like movement as 2D ultrasounds.

This Youtube video shows exactly what each ultrasound looks like and makes it easy to distinguish between them:

Despite their visual differences, all three ultrasounds are performed similarly.

How Do Ultrasounds Work?

No matter which ultrasound you choose, the technician will conduct them all in primarily the same way. The only difference is the visual outcome.

All three ultrasound types are noninvasive and use high-frequency sound waves to create pictures – sonograms – of what’s going on inside your body (Source: Cleveland Clinic).

When you go in for a pregnancy-related ultrasound, the tech will put gel on your stomach. Then, he will roll a device called a transducer over your belly. The transducer emits sound waves, which bounce around and off of your internal organs and the baby. In turn, those bouncing sound waves create a visual image.

That image will look different depending on whether you’re receiving a 2D, 3D, or 4D ultrasound.

Does a 4D Ultrasound Hurt?

It doesn’t matter which particular ultrasound you’re getting; the process should not hurt. The gel on your tummy may be a little cold, and the pressure the technician has to put on your stomach with the transducer might be a bit uncomfortable, but it shouldn’t be painful.

If you feel any pain or anything other than mild discomfort, you should let your ultrasound tech know immediately. On average, the whole thing takes 30 minutes or less and shouldn’t present you with any significant difficulties.

Truthfully, the most challenging part of an ultrasound for most expectant moms is the eight to 12 hours fasting beforehand. That can be a little tough, but it’s important. Having too much undigested food sitting in your stomach can interfere with the bouncing of the sound waves and leave you with poor results.

Most pregnant women only get two ultrasounds during their pregnancies, so you want to make sure you get the best, most accurate results possible during each one. Be sure to ask your doctor how many hours ahead of time you need to start fasting.

Furthermore, find out if you can continue to drink water and take your medications as usual.

Are 4D Ultrasounds Safe? Should I Get One?

As with almost any medical procedure, there is some level of risk. Luckily, the risk of injury to you or your unborn baby from an ultrasound is minimal. As a result, ultrasound technology is generally considered “safe.”

However, that said, there are some things to consider.

Ultrasounds can affect your body. For example, they can heat your body’s tissues slightly or cause small pockets of gas to build up in your tissues or bodily fluids.

Because there’s no definitive study outlining the consequences of these effects, medical professionals, scientists, and researchers like to limit the number of ultrasounds a person has.

Furthermore, according to the FDA, ultrasound imaging is only safe if conducted by “appropriately trained healthcare providers” and when used only as necessary with no prolonged exposure (Source: FDA).

So What Does That Really Mean?

It means 4D ultrasounds are generally just as safe as 2D or 3D ultrasounds if performed during the regularly scheduled ultrasound appointment in the same way, for the same reasons, and for the same brief amount of time. The problem is that that’s not always how or why people get them.

More often, parents-to-be choose to have 4D ultrasounds for non-medical purposes. Instead, they get them so they’ll have a “keepsake video” of the unborn baby. Most medical professionals and the FDA strongly advise against getting 4D ultrasounds for this purpose (Source: FDA).

These videos often require mothers to undergo ultrasounds for longer lengths of time. Furthermore, because the videos are made for nostalgic or sentimental reasons instead of medical ones, the ultrasound is unnecessary.

Exposing a fetus to any type of unnecessary testing is risky. Ultrasounds, in particular, subject the fetus to additional sound waves, heating of tissues, gas, and an increased risk of unknown consequences.

Furthermore, some studies link frequent ultrasounds to lower birth weights. While more evidence is needed to substantiate this claim, it’s another reason to consider only having ultrasounds when they’re medically necessary (Source: National Library of Medicine).

When Is the Best Time To Get a 4D Ultrasound?

As an expectant mother, it’s completely understandable to want a gorgeous, three-dimensional video of your beautiful baby.

If you choose to get a 4D ultrasound, though, it’s best to do it only in the course of your regularly scheduled exam.

Most medical professionals recommend getting one sonogram in the first 12 weeks of pregnancy to:

A second ultrasound may be warranted in the second or third trimester for the following reasons:

The people who run them aren’t necessarily medically trained professionals and may not know how to safely and accurately use the imaging equipment. There are plenty of these places scattered throughout the United States, but I won’t be linking to or naming any of them.

How Much Does a 4D Ultrasound Cost?

As I’ve already mentioned, several commercial centers can provide expectant mothers with 4D ultrasounds of their developing babies. The price for these services ranges from $30 to over $600, depending on what “package” you purchase.

However, as I’ve also mentioned, you really shouldn’t visit these places for ultrasounds. It’s unnecessarily risky for both you and your baby. Therefore, if you’re getting a 4D ultrasound, you should get it from your OBGYN during regularly scheduled appointments.

Will Insurance Cover the Cost?

The problem is that some doctor’s offices don’t have 3D and 4D imaging capabilities. Even those who do won’t often perform 4D ultrasounds unless specifically asked to do so by the parents. In most cases, insurance won’t cover these ultrasounds, either.

For example, according to Alabama’s Medicaid program guidelines, “All ultrasounds must be medically necessary with documented medical diagnosis supporting the benefit of the ultrasound procedure” (Source: Alabama Medicaid).

That means a 4D ultrasound won’t be covered unless there’s a very compelling reason why it should be. An example of a legitimate reason for having a 4D ultrasound would be if the doctor suspects a spinal injury or some other type of congenital disability that needs closer examination before delivery (Source: WebMD).

Because hospitals, doctors, and specialists charge different prices for the services they provide, I can’t give you a precise dollar amount for how much your doctor would charge for a 4D ultrasound.

However, after doing some online research and price comparison, it seems the range is somewhere between $125 to $250 at legitimate healthcare facilities.

How Do You Know if Your Doctor Provides 4D Ultrasounds?

The only way to know for sure that your doctor’s office does 3D and 4D sonography is to check with them and see. If you’re early in your pregnancy and haven’t settled on a doctor yet, ask about 4D ultrasounds as you’re calling around to speak to different doctors.

Although many won’t quote price estimates over the phone, they should all be happy to tell you whether or not they can accommodate the request.

We’ve already covered most of the pros and cons of getting a 4D ultrasound, but if you’re anything like me, you like to see things in simple, easy-to-read terms when trying to make an important decision.

Hopefully, this article has helped you decide whether or not a 4D ultrasound is the right choice for you. Just remember, if you do decide to have one, make sure you have it done by a licensed, medically trained professional.