Anyone who has ever been pregnant can tell you that nausea and cravings are just part of the package. However, just because something is “normal” doesn’t mean you simply have to lie back and deal with it! Why sit around and be miserable when you could easily buy something to help with those problems?

There are some excellent candy choices available that will help you deal with both your cravings and your morning sickness (or all-day sickness, if that happens to be the case). Whether you’re looking for Preggie Pop Drops, Morning Sickness Sweets, or something else, you can find it online.

In this article, I’ll be reviewing my five top picks for the best candy options for pregnancy cravings and problems. I’ll also answer some common questions concerning pregnancy and candy, so keep reading to find out more.

1. A Little Ginger Can Calm Your Morning Sickness Right Down 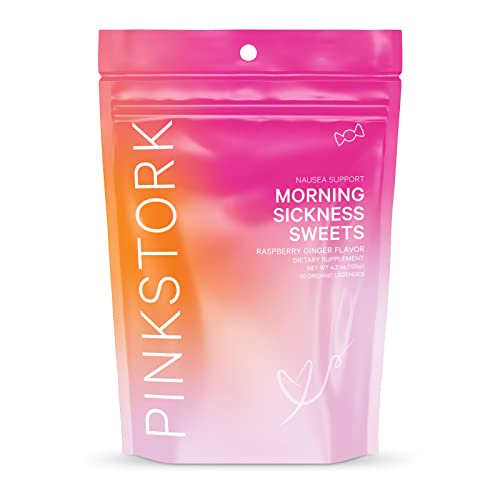 These 100% organic raspberry ginger candies give you a bright burst of flavor while also helping to calm down your stomach on those mornings when you wake up and can’t seem to get your nauseous tummy under control.

The main ingredients in this candy, vitamin B6 and ginger, have both been proven to help with both morning sickness and non-pregnancy-related nausea, and these tasty candies have 15 grams of each (sources: University of Michigan Health & Integrative Medicine Insights).

If you aren’t a fan of the pungent, robust taste of ginger, these candies are a good choice. The raspberry is lightly sweet and just a bit tart, and it helps tone down the most overwhelming aspects of the ginger flavor.

They’re also long-lasting, which is good news since they’re a bit pricey. Most women, myself included, get by sucking on only one or two a day, allowing a single bag to last two weeks to a month.

2. For Those Sour Cravings That Just Won’t Go Away 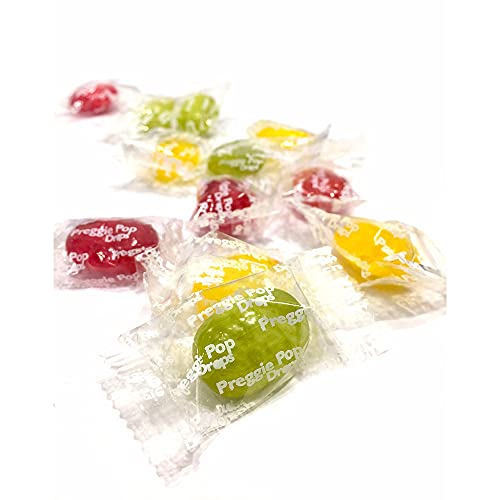 If you’re craving something a bit sourer, Three Lollies makes a whole line of Preggie Pop Drops. This particular product caters to those when a craving for tart candies and contains four different flavors:

The great thing about Preggie Pop Drops is that you don’t have to worry about what you’re putting in your body because they’re 100% organic and USDA-certified. Because they’re made with essential oils, you’ll also know you’re getting the best, most soothing, and natural flavors possible.

The closest comparison I can make with these is that they taste a little like Jolly Ranchers, but they are definitely sour, so know that before buying them. Additionally, the colors may not look how you’re expecting them to look.

Because Three Lollies uses all-natural ingredients and colorants, the colors aren’t as bright as candy with artificial ingredients.

If you need a sour candy option to satisfy your cravings and help with nausea, you can’t go wrong with these. 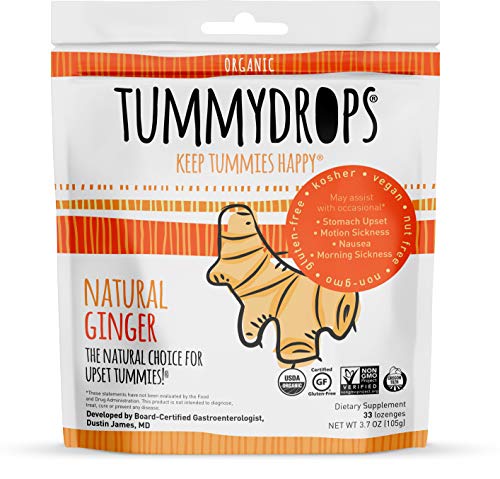 You have to really be in the mood for ginger to enjoy these candies because that’s precisely what they taste like – pure hot and spicy ginger. That said, they are one of my number one go-to products for nausea and digestive health, even when I’m not pregnant.

Invented by board-certified gastroenterologist Dr. Dustin James, these candies have everything they need to be the best candy for nausea, morning sickness, upset stomachs, motion sickness, and more. For example, they are:

So what does all of that mean for you? It means you’re getting a simple, natural product made with only four ingredients that are pretty much guaranteed to work well for anything you have going on related to digestive issues.

Tummydrops has other flavors that aren’t quite so intense (and a few that are much more intense), but I’ve found these to be the most consistently helpful when dealing with tummy problems.

4. For Those Who Need a Vegan-Friendly Option 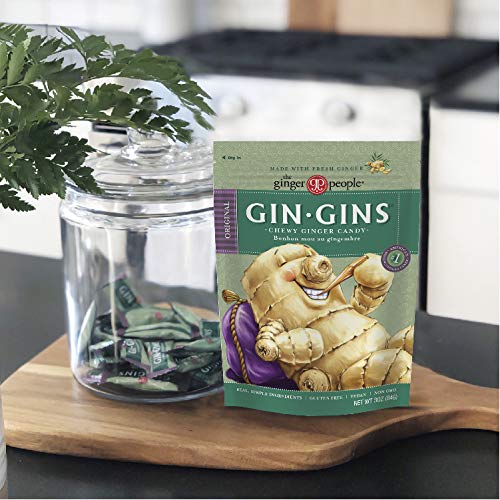 Of all the options on the list, Gin Gins are the only ones that don’t specifically market to pregnant women, but that doesn’t mean they don’t help with the same pregnancy-related (or non-pregnancy-related) stomach problems. These things are phenomenal.

In addition to being natural, GMO-free, and gluten-free, Gin Gins are also vegan friendly, which is more difficult to find in candy than you might realize! You’ll love their spicy taste and exceptionally chewy texture, and they’re sized just right to last at least 15 minutes or longer for most people.

These are also an excellent choice for people on a budget, and they’re easier to find than some of the other candies. You can pick them up in most grocery stores or mass merchandise retailers that sell groceries.

5. Everyone Loves a Sucker 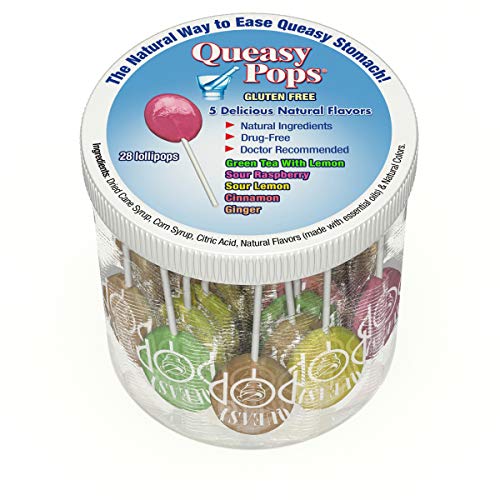 Queasy Pops are another Three Lollies specialty, and despite their somewhat high price, they’re one of the most trusted sources for nausea and morning sickness. These work so well that I recently bought a pack for my dad, who has cancer.

Because each sucker is individually wrapped, you can simply slip a few into your purse, bag, or the console of your car so that you have them when you need them without having to carry around the whole case.

There’s also a wide variety of flavors to suit practically anyone’s tastes, including:

Whether you’re in the mood for sweet, sour, or spicy, you’ll find something in the pack that should satisfy that craving.

*Note: Like the Preggie Pop Drops, these lollipops are made with all-natural flavors and colors, so don’t be surprised if they aren’t as bright, shiny, and colorful as the other lollipops you’ll find on the candy aisle.

What Does it Mean if I’m Craving Sour Candy When Pregnant?

If you were alive 1000 to 1500 years ago, physicians might have told you that your craving for sour candies was a result of your bodily humors being off-balance.

One famed physician of the time, Maimonides, claimed that women had “bad liquids” built up in their tummies because they didn’t menstruate while pregnant. These liquids caused them to crave sour and spoiled foods (source: The Boston University Undergraduate Science Magazine).

Fortunately, doctors today know that’s not the case. However, they still don’t know precisely why women crave sour things – or any other flavor of things – when they’re pregnant.

The most likely reason you crave sour foods when pregnant is that they’re foods that make your body happy and don’t trigger nausea, vomiting, or other common issues. It may also be your body’s way of replenishing missing vitamins and minerals, but that’s not as likely (source: First Year Planner).

Scientists, doctors, and researchers have been studying pregnancy cravings for decades, and surprisingly, the answers they’ve come up with still aren’t all that impressive. Most now agree with the theory that the body knows what the body wants.

Just as sick people will crave chicken noodle soup or people with sore throats will crave honey or something spicy to ease the pain, pregnant women’s bodies also crave foods that will sit easily on their stomachs and not make them sick.

Other theories that have been posited over the years to varying levels of criticism include:

Some of those sound like old wives’ tales or – in the case of the last one – wholly made up, but they aren’t. People have had some weird theories through the years.

Is Candy Safe During Pregnancy?

It’s safe to eat candy while you’re pregnant, but you should do so in moderation, as most candy is high in sugar. The only candy doctors recommend you avoid while pregnant is licorice, as it can lead to premature labor (source: American Journal of Epidemiology).

All other candy is fair game, but be sure you limit yourself. Most of your calories while pregnant should come from non-starchy veggies, followed by protein and whole grains/starchy veggies in equal measure, then fruits (source: Oregon Health and Science University).

No matter what pregnancy issues you’re dealing with – morning sickness, all-day nausea, or a desperate need for something sour – hopefully, you’ll find something to help on this list. Just remember, like everything, you should consume pregnancy candy in moderation. If you have gestational diabetes, check with your medical provider, too.