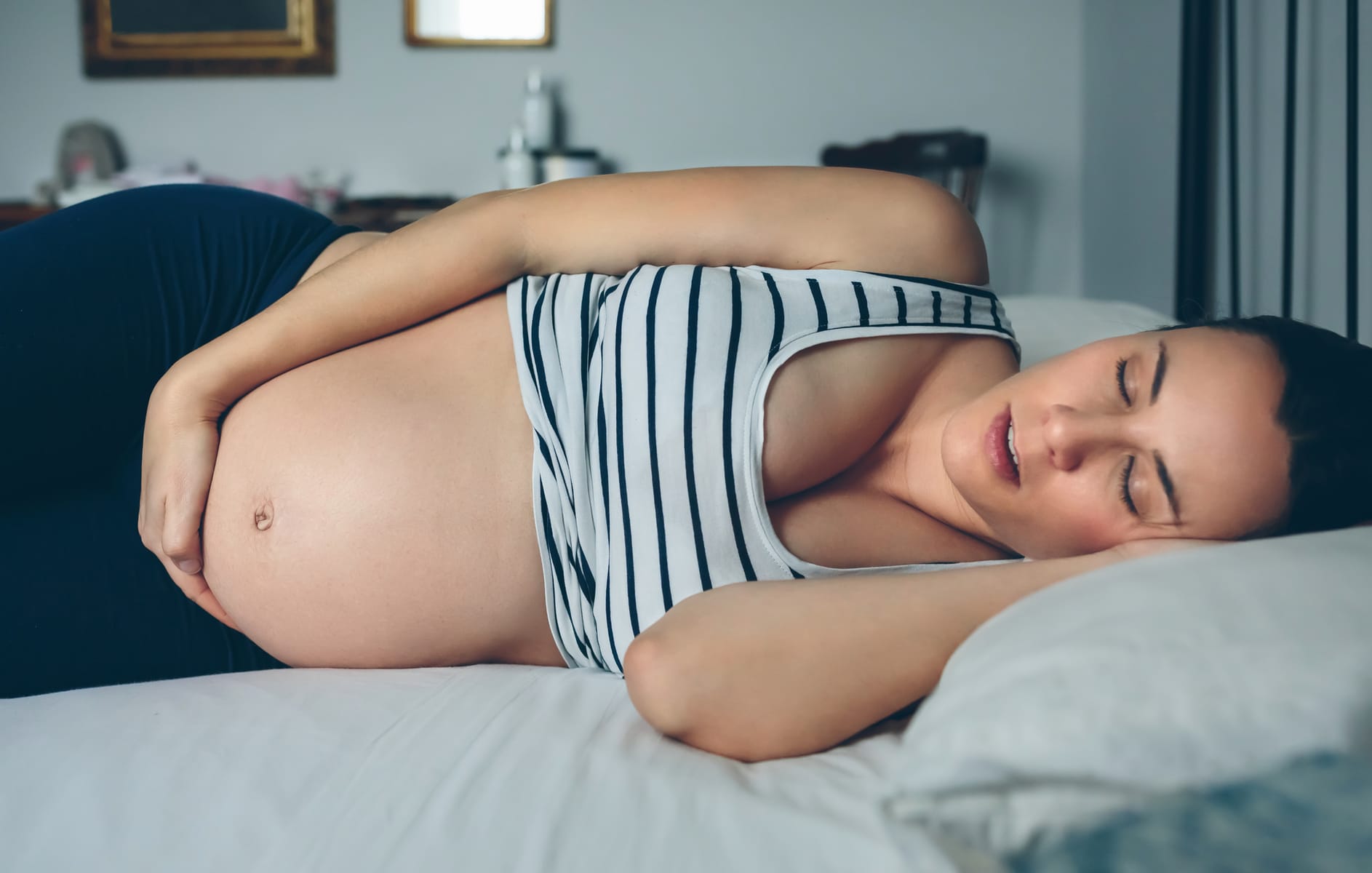 A quick Google search will turn up a dozen or more answers for, “What are the best positions for active labor?” However, finding information on the best sleeping positions to induce labor isn’t quite as simple. Believe me, I’ve looked.

This article will give you more information about why left side-sleeping is important, how it can help prevent stillbirths, and which positions can help you get the most sleep before labor. It’ll also explain why back- and belly-sleeping aren’t good options. Keep reading to find out more.

One of the most frustrating questions I’ve ever asked my friends, family members, and dozens of medical professionals concerning pregnancy is, “What’s the best sleeping position to induce labor?” It was so frustrating because no one could ever give me a real answer.

Usually, they would tell me, “Don’t sleep on your back!” or “You can’t sleep on your belly!” I kept hearing about all of the things I couldn’t do, but no one would actually answer my question and tell me what I could do.

Finally, I gave up on asking and started doing a bit of research instead. Unfortunately, the results were almost as frustrating. However, I did keep reading that pregnant women in their third trimesters should sleep on their left sides. But why?

As it turns out, there are legitimate, scientific reasons for this beyond the fact that it’s comfortable, although that is a compelling reason, as well.

Sleeping on your left side just feels better as your stomach gets larger. However, other, more important benefits include:

Additionally, multiple studies have proven that left side-sleeping can potentially reduce the risk of your baby being stillborn (source: BMC Pregnancy and Childbirth).

How Left Side-Sleeping May Prevent Stillbirths

As an expectant mother, reducing the risk of injury (or worse) to your growing baby is of paramount importance. So if something as simple as sleeping on your side could decrease the chances of stillbirth, there’s no question that you’ll do it.

However, many women want to know the science behind this belief. Luckily, there are plenty of studies to back it up. In addition to the one cited in BMC Pregnancy and Childbirth, other studies have been conducted with similar results. If you’d like to read more about these, please refer to any of the following sources:

While the rationale behind the findings isn’t 100% known or documented, it mostly has to do with the potential of restricted blood flow to the fetus when a mother sleeps on her back or in any non-left side-sleeping position. Right side-sleeping is also associated with fewer stillbirths, but not to the same extent as left side-sleeping.

Back- and belly-sleeping put the baby most at risk (source: Science Direct E Clinical Medicine).

Why Back-Sleeping Isn’t a Good Idea

If you’re in your first trimester, sleeping on your back isn’t necessarily a bad or dangerous thing. However, the closer you get to your delivery date, the more perilous back-sleeping can be.

However, that small amount of weight is enough to compress the inferior vena cava, the blood vessel that carries deoxygenated blood to the heart.

If your uterus compresses the vena cava long enough, you can become dizzy or sick to your stomach. It may even make it hard for you to breathe (source: Ohio State University Wexner Medical Center).

Why Belly-Sleeping Is a Bad Idea

Belly-sleeping causes all of the same issues as back-sleeping, including the compression of the inferior vena cava and aorta, restricted blood flow, and restricted nutrient flow to your fetus.

Additionally, it’s simply not possible for many women to sleep on their bellies after a certain point in their pregnancies because it just isn’t comfortable.

Imagine sticking a huge exercise ball under your gown and trying to sleep on it. It’s not a pleasant image, and it’s not much fun to do on a large pregnant belly, either (source: Ohio State University Wexner Medical Center).

The Benefits of Getting Enough Sleep Pre- and During Labor

The labor times grew even longer for women who slept significantly less than six hours, and they were 5.2 times more likely to need C-sections (source: American Journal of Obstetrics and Gynecology).

However you look at it, that clearly shows that getting regular, uninterrupted sleep is crucial to the birthing process. Overall, women who sleep better have shorter deliveries, are less likely to need Cesarean deliveries, and generally have healthier babies.

And those are just the benefits explicitly associated with sleeping and pregnancy.

There are numerous non-pregnancy-related reasons for getting enough sleep, including:

Why Sleep Gets Harder in the Third Trimester

I’ve outlined plenty of benefits to getting enough sleep in your third trimester, especially as your due date gets closer. However, the bad news is that for a lot of women, sleep gets so much harder in those last few weeks.

Some of that is just pure nervousness. The closer you get to your delivery date, the more nervous, anxious, excited, and afraid you’re going to be. With all those emotions running through your head, it makes it hard to fall asleep at night.

Additionally, you’re probably larger than you’ve ever been before, and that comes with its own issues. An increase in metabolism is another factor in keeping most women awake near delivery.

Plus, except for maybe 24 to 48 hours before your labor starts, your baby will be moving more than ever in the third trimester, which will also keep you awake. Many women also complain of leg cramps more often during the third trimester.

Finally, for a myriad of reasons, bathroom runs seem to be more frequent right before the baby is born. It’s hard to get a good night’s sleep when you’re waking up every hour or so to go pee (source: U.S. Department of Health & Human Services: Office on Women’s Health & Medline Plus).

The Best Position for Getting Long, Interrupted Sleep Pre-Labor

So we’ve determined that there’s not really a sleeping position that’ll help induce labor, but that doesn’t mean there isn’t a “best position” for providing you with long, interrupted sleep before your labor begins.

Simply put, the best position for preparing you for labor is the one that keeps both you and your baby safe, makes you the most comfortable, and allows you to get the most sleep possible pre-labor and delivery.

Of course, by this point, it should come as no surprise that that position is sleeping on your left side. However, there’s actually more to it than that.

The very best position for sleeping or resting between contractions when labor starts is as follows:

Some people call the last position the side-lying lunge; others refer to it as the exaggerated SIMS position.

This position is comfortable, and it keeps your pelvis open, in addition to all the other left side-sleeping benefits I’ve already discussed. There’s also some evidence to suggest that it might be the most optimal position for preventing vaginal tears during labor (source: University of Minnesota Taking Charge of Your Health and Well-Being).

If you came here hoping for a magical sleeping position to help induce your labor, I’m sorry I couldn’t provide that. However, I hope that this article has given you more information about the best sleeping positions for getting plenty of rest and for keeping your baby safe – both of which are excellent prep for labor!