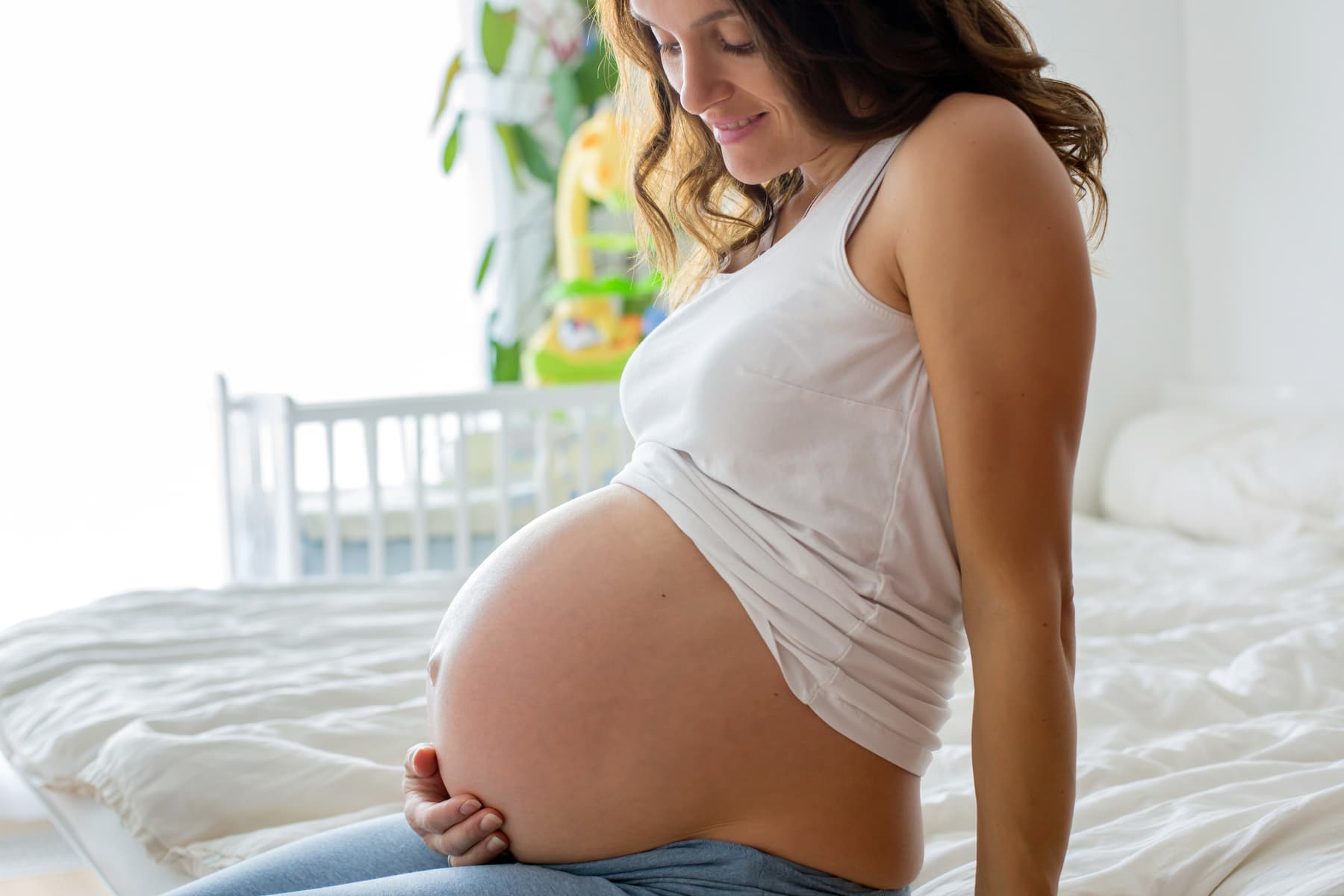 The thought of having their labor induced is terrifying to some women, but as of 2018, 25.7% of labors were induced. That means that over one-fourth of women – more than 750,000 – in the United States alone experienced labor inductions.

Still, knowing something is common doesn’t make it any less scary, but hopefully, learning a bit more about the induction process will. (sources: BMC Pregnancy and Childbirth & CDC)

The actual process of inserting Cervidil into the vagina doesn’t hurt most women. It’s much like your yearly pap smear. However, once Cervidil is in place and begins releasing dinoprostone into the body, some women experience cramps, stinging sensations, and other discomfort or pain.

If you’d like to learn more about the Cervidil induction process, what you’ll feel during the insertion, and other Cervidil-related information, keep reading. I’ll also cover common side effects and compare Cervidil with other big names in labor induction.

What To Expect When Using Cervidil for Induction

Your doctor may use Cervidil if your cervix isn’t in an optimal state for giving birth (squishy, soft, relaxed, and open). Cervidil isn’t a manual induction tool, like the Foley catheter, a type of balloon placed in the vagina and then inflated to put pressure on the cervix.

Instead, it’s small, thin, and flat – some women say it’s like a flat tampon – and it works by releasing the same hormones into your cervix and the amniotic sac that your body should already be releasing.

It’s a cervical ripening agent; it isn’t actually a proper method of induction and won’t necessarily trigger contractions (though it sometimes does).

It’s a slow process, as the device continues to release the medicine into your body for 12 solid hours.

Insertion and Placement: What Happens

Although insertion is simple and relatively painless, it will be done by a medical professional to be sure it ends up in the right place and that the process goes smoothly.

You’ll lie on your back, and the doctor or nurse will insert the small, flat, tampon-like device into your vagina, leaving the ribbon hanging out much like a tampon string. Cervidil will rest against your cervix; that way, the medicine is released precisely where it should be.

After insertion, which doesn’t take long at all, you’ll have to remain lying down for two hours (so be sure you go to the bathroom before insertion because you won’t have a chance for at least two hours after insertion).

After that, you’ll be able to move around as long as you haven’t been ordered to bed rest for the remainder of your pregnancy.

Does Cervidil Hurt? Is It Painful?

As I’ve already mentioned, the actual insertion process isn’t painful for most women. However, once the device starts releasing medicine into your cervix, you may feel some pain or discomfort.

Cervidil can cause uncomfortable or even painful contractions, similar to menstrual cramps, in some women. Other women claim the cramps are more severe, and still others report feeling “jellyfish zaps and stings” from the device. If true contractions start, those are also painful.

However, childbirth is a painful process, and labor that’s started with a Cervidil induction doesn’t appear to be any more painful than spontaneous labor or childbirth sparked by other induced labor drugs.

Both involve cramping and menstrual-like pains, and both eventually lead to contractions. The only fundamental differences are those zaps and stings mentioned in the Romper article, and not every woman feels those as intensely or at all.

Cervidil vs Cytotec: What’s the Difference?

Cervidil and Cytotec both work in much the same way. However, there are some significant differences (but also some similarities) between the two of them.

Let’s break them down here.

In terms of effectiveness, there are no notable distinctions between the two drugs. In a study in the American Journal of Obstetrics and Gynecology, researchers found both misoprostol and dinoprostone to be equally as effective for ripening the cervix and preparing for induction. They also claimed similarities in the following areas:

The average vaginal delivery time was shorter in patients induced with misoprostol, but only by an hour, which the researchers didn’t find significant.

Cervidil vs Pitocin: How Do They Compare?

When it comes to Cervidil and Pitocin, the two are harder to compare. It’s not precisely like comparing apples and oranges, but it’s close enough; the two drugs are very different.

In most cases, doctors use Cervidil simply to ripen the cervix and get it ready for induction and childbirth. Often, they still have to use another drug, such as Pitocin, to actually jumpstart the induction process. Pitocin is usually a stand-alone drug specifically designed to induce labor.

Medical health professionals also administer the two drugs in totally different ways. As we’ve already discussed, Cervidil is inserted into the vagina, whereas Pitocin is administered to patients intravenously.

On average, Pitocin also works much more quickly. It still takes some women six to 12 hours before active labor starts; however, in many cases, it happens much more rapidly.

What Are Typical Side Effects of Cervidil?

Although Cervidil is relatively safe, some recorded side effects include nausea, abdominal pain, fever, diarrhea, and vomiting. There’s also the potential for more severe side effects, but these are extremely rare.

The following are more potential side effects of Cervidil (taken directly from the manufacturer’s website):

Cervidil has caused more serious side effects in extremely rare cases, such as Anaphylactoid Syndrome of Pregnancy (Amniotic Fluid Embolism). As mentioned earlier, it also contributed to abnormal fetal heart rate in 35.7% of cases in the American Journal of Obstetrics and Gynecology study.

There are more severe risks associated with misusing Cervidil or with using it in conjunction with other drugs with which it shouldn’t be used. For more extensive information on Cervidil’s side effects, speak to your doctor or check out the Cervidil website.

Cervidil can jumpstart labor in only the rarest cases. It’s a cervix primer; it softens and relaxes the cervix to prepare it for childbirth. It rarely induces it. However, some women can begin having contractions after the doctor administers Cervidil, which can lead them to the active labor stage.

In most cases, though, Cervidil is only the starting point for induced labor. If labor doesn’t happen naturally several hours after the medical professional inserts the device, doctors usually use another drug, such as Pitocin, to officially induce labor.

During uterine hyperstimulation, contractions can also last too long; over two minutes long is considered problematic. Having five or more contractions in a single ten-minute period is also an issue.

Both of these problems can lead to severe fetal damage or even fetal death in severe cases. (source: Obstetrical & Gynecological Society)

What’s the Success Rate of Cervidil?

Cervidil successfully ripened the cervix of at least 55% of women in all three clinical trials. In women who had only had one child or hadn’t yet had a child, the success rates were 65%, 68%, and 72%. In women who had had multiple children, the rates were 55%, 77%, and 87%.

These results show that no matter a woman’s status (first-time mom or not), Cervidil worked for the majority of them in all cases.

Furthermore, aside from a single study, the drug was markedly more successful for women who already had more than one child.

Where Can I Read Cervidil Stories and Experiences?

You can read Cervidil success stories on most online mommy blogs, mommy- and pregnancy-related forums, and even on YouTube! Plenty of women include Cervidil as part of their birth stories, and most speak very highly of it.

The community on the WhattoExpect website has several women’s stories of using Cervidil, such as Khabibaron, who said, “I started to have contractions 3 hrs after the Cervidil was inserted and my baby girl was born less than 12 hours later. No need for Pitocin!”

Additionally, Kelly Mullen-McWilliams, writing for Romper, finishes her “jellyfish” Cervidil story by saying, “The fact is, I loved my birth. If medically necessary, I would choose Cervidil — that weird but gentle jellyfish — again. Yes, contractions are painful, but in my own experience, Cervidil just stings.”

There’s another great story on The Bump forum from doyalnr. In it, she claims the look on the nurse’s face was “priceless” that “that much progress had been made” after only such a short time had passed after receiving her Cervidil insertion.

If you want to hear about more Cervidil success stories, do some online sleuthing, talk to your friends and family members, and bring up the topic in your Lamaze or mommy classes. There are even whole threads on Reddit where women are sharing their Cervidil stories!

More women have been induced than you think, and plenty of those women used Cervidil to help them.

If you take only one thing away from this article today, I hope it’s this: Don’t start panicking over the words “induced labor.” It’s more common than you realize, and your doctor certainly knows what he’s doing and what’s best for you and your baby.