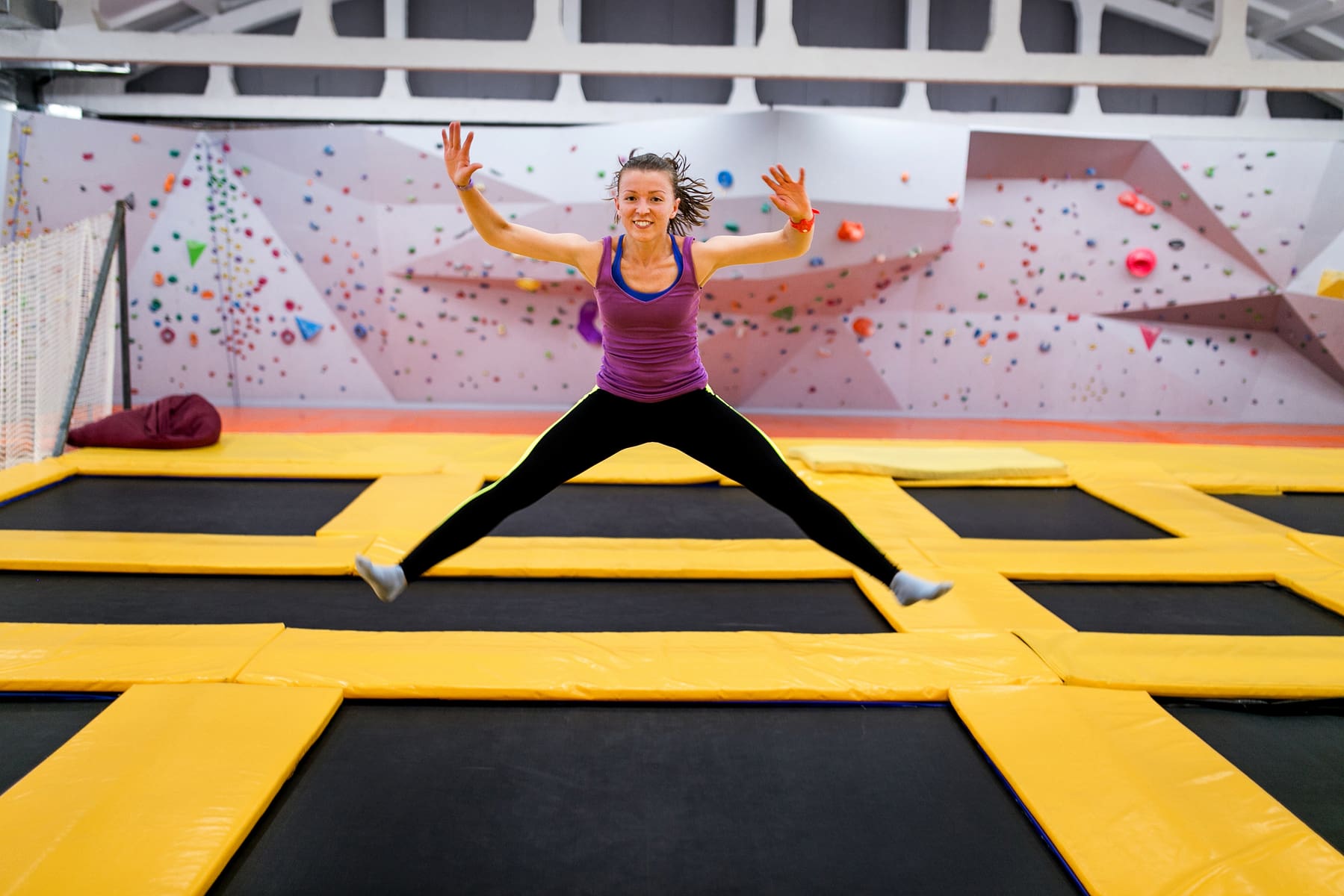 Some things in life stay fun no matter how old you get – walking through (or jumping into) a big pile of leaves, popping bubble wrap, and having snowball fights are just three examples. Jumping on a trampoline is another exciting activity everyone loves to do, but can you do it safely if you’re pregnant?

Some online sources say it’s safe to jump on a trampoline while pregnant. However, most doctors suggest focusing on “low-impact or non-jumping exercises” and avoiding “those that may cause you to lose your balance, fall or cause abdominal trauma” (source: University of Nebraska – Lincoln).

With those recommendations in mind, it would seem that jumping on a trampoline may not be as safe as some internet blogs make it seem. In this article, I’ll talk more about whether or not you can safely jump on a trampoline while pregnant, whether doing so will induce labor and other relevant topics.

Can You Jump on a Trampoline While Pregnant?

You shouldn’t jump on the trampoline while pregnant. While the act of jumping – and especially gentle bouncing – isn’t likely to disturb your baby, there are still too many accidents that could potentially happen while jumping on a trampoline.

There are over 100,000 reported trampoline accidents annually. That may not seem like a lot when you consider there are millions of car accidents per year, but that’s still a considerable risk to take to do something that’s so easily avoidable while pregnant (sources: Pediatrics and Child Health & Centers for Disease Control and Prevention).

But what if jumping on a trampoline is part of your everyday exercise routine?

It doesn’t matter which trimester you’re in – doctors recommend only performing low-impact exercises and making sure not to overdo even those simple exercises. When you’re pregnant, too much high-impact exercise can put you at risk for miscarriage – and that’s without mentioning the potential for other injuries.

If you’re not convinced, let’s take it trimester by trimester.

You’re barely showing during your first trimester, and your body is still pretty much the same body you’ve always had. With that in mind, it should be fine for you to jump on a trampoline if you’re used to that type of exercise, right?

According to numerous studies, the first trimester is when most miscarriages happen. At that point, your baby is little more than a few small cells, and damaging just one single cell can have catastrophic consequences (source: Healthline).

Think of it like this: You have ten fingers on your hands. If you lose a single finger, it’s going to be tough, but you can figure out how to use the other nine to accommodate for the loss, and eventually, you’ll be able to do things almost normally again.

However, if you lose one of your two arms, things will be much harder for you. The same is true of your baby’s cells. The fewer cells that make up the fetus, the more dangerous it is if one gets damaged.

Additionally, your body starts secreting pregnancy hormones early on in your pregnancy. These hormones are responsible for all kinds of things, including issues with your joints and muscles, your center of gravity, balance, and posture.

Even though you may not feel any different right away, you may not have the same abilities and coordination as you did before you were pregnant (source: University of Rochester Medical Center).

During your second trimester, these hormone issues are still at play. Plus, your body is physically changing to make room for your growing baby. That means you’re going to be even more ungainly and off-balance. Therefore, it’s not a good time to be jumping high in the air, trying to land on your feet.

Finally, in your third trimester, you’ll be the largest you are in your entire pregnancy. We’ll discuss this in more depth in a later section, but for now, suffice it to say that no woman in her third trimester should be trying to jump on a trampoline.

If you feel like you absolutely must jump on a trampoline to keep up your exercise regime while pregnant, talk to your doctor and see if he thinks it’s safe for you to bounce gently on a mini-trampoline.

There’s less potential for injury on a miniature trampoline, and you won’t be likely to jump as high or as wildly. Still, make sure it’s okay with your doctor before doing even this small amount of jumping.

Can Jumping on a Trampoline Cause Miscarriage?

It’s possible that jumping on a trampoline can cause miscarriage. One 2007 study found a higher risk of miscarriage for women who participated in “high impact” exercises in the early stages of their pregnancies (source: The Pennsylvania State University).

Perhaps surprisingly, in that same study, no links were found between the amount of exercise and the later weeks of pregnancy – however, this still doesn’t mean you should jump on a trampoline.

Even if the act of jumping itself isn’t likely to cause you to miscarry in the later stages of pregnancy, there are still too many things that could happen that might lead to miscarriage. These include:

Jumping on a Trampoline To Induce Labor: Does It Work?

The farther along in your pregnancy you are, the bigger and less coordinated you are – that’s just how pregnancy works. If everything is okay with the baby, you should be at your largest and clumsiest right before giving birth.

Jumping on trampolines comes with some amount of risk anyway – you could always fall, lose your balance, or land in a way that hurts you or your baby. When you’re about to give birth, these things are even more of a risk, so whatever you do, please, don’t try jumping on the trampoline to induce labor.

Can I Go to a Trampoline Park When I’m Pregnant?

Most parks will require you to sign a waiver releasing them from liability if you get injured, or your property gets damaged or stolen. Sometimes, these waivers are short, sweet, and to the point, but others are pretty lengthy.

Either way, they frequently include a section that explicitly warns pregnant women against jumping. Additionally, most trampoline parks list “Park Rules” on their website and physical signs in the parks themselves.

These often include more reminders, such as “Do not jump if you are pregnant or have other health limitations” (source: Altitude Trampoline Park).

Even if your doctor has told you that it’s safe for you to jump on a trampoline while pregnant, you’ll still want to avoid trampoline parks. They’re usually full of people – mostly kids – who’ll be running, jumping, bouncing, turning flips, kicking balls, and doing all kinds of other activities.

These kids don’t always look where they’re running, bouncing, or kicking their balls, and they could accidentally crash into you, kick a ball into your stomach, or otherwise cause an accident. For these reasons, it’s best to stay away from trampoline parks altogether.

If you can’t avoid them – because of a birthday or other special occasion – stay as far away from the action as possible.

The internet is a great tool that can provide you with a ton of excellent, easy-to-access information – however, sometimes, it also gets things wrong. If you’ve read online that it’s safe for you to jump on a trampoline while pregnant, I hope this article has given you enough information to help you decide on another course of action.