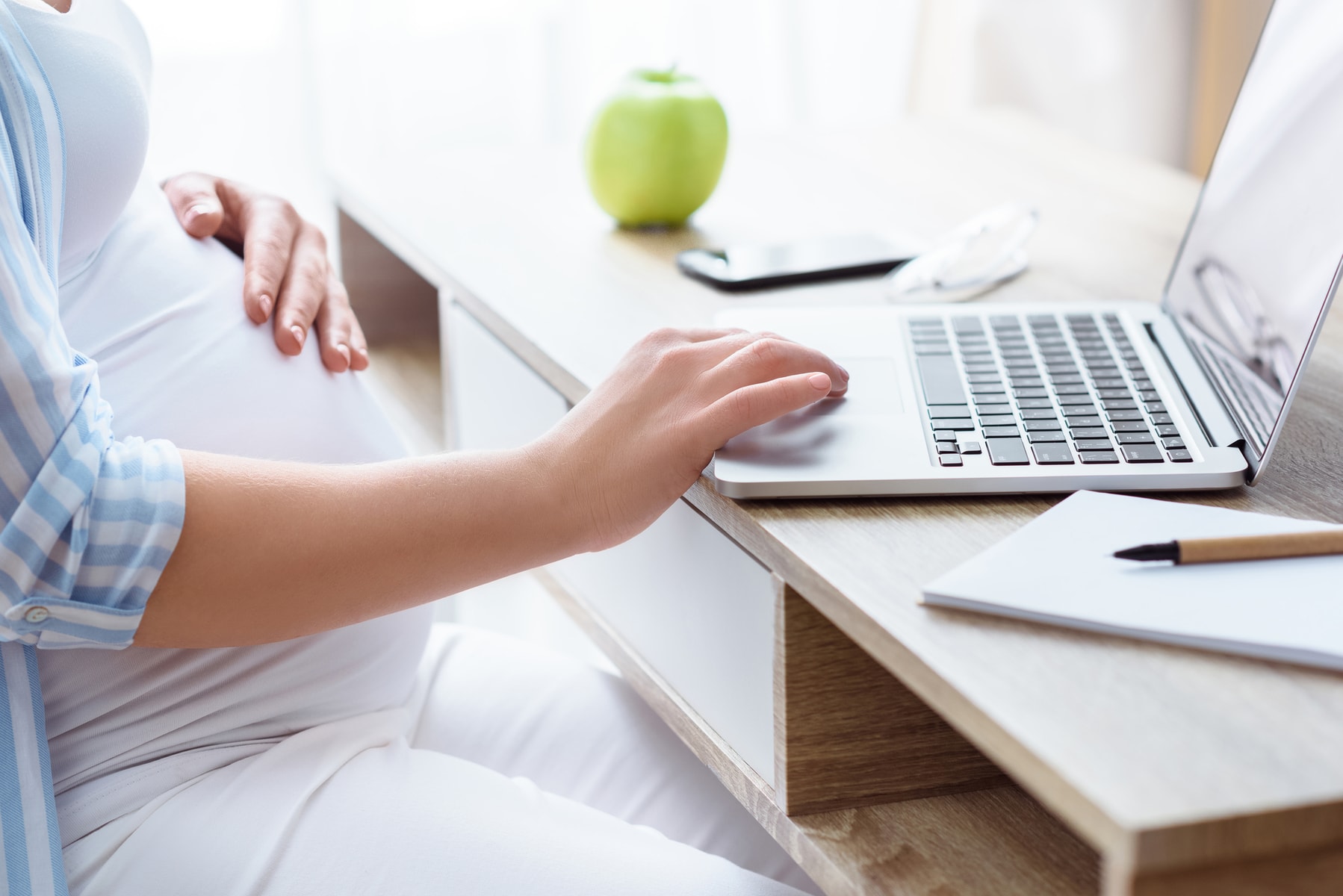 The use of laptops is widespread and part of most people’s daily routines. However, some expectant mothers worry that using a laptop while pregnant may potentially harm their developing babies. Is there any reason for them to worry?

Laptops usually aren’t harmful to expectant mothers as long as those women use the laptops correctly. When you use laptops, you should always place them on desks or tables, not on your stomachs or abdomens, and exposure should be limited whenever possible.

This article will go into more detail about how to safely use your laptop while you’re pregnant and the things you shouldn’t do with it. It will also discuss whether or not you should be carrying around that heavy laptop bag wherever you go. Keep reading to find out more.

Is Using a Laptop Safe During Pregnancy?

It’s generally safe to use a laptop while pregnant, as long as you keep it in a suitable area. Always set it on a piece of furniture and not on your lap or abdomen. Doing so isn’t usually problematic, but it has the potential to be, and as an expectant mom, there’s no reason to take the risk.

As Dr. Christopher Baird points out in his column “Science Questions with Surprising Answers,” laptops actually do put out radiation. However, the types of radiation they put out “are typically harmless to humans.” (source: West Texas A&M University)

Simply put, that means laptops are safe for people to use, even in large amounts.

However, there are some studies that show that prolonged laptop use, particularly when the laptop is touching a person’s body, can have negative consequences, such as decreased sperm count for men and speech problems in the children of pregnant mothers who overuse their laptops and cell phones (sources: Journal of Biomedical Physics & Engineering & Journal of Biomedical Physics & Engineering).

The main problem with laptop use – if there is one – occurs when women hold their laptops on their lap and abdominal areas. The laptops often get too hot, and having that much heat sitting directly on top of your developing fetus generally isn’t a good idea.

Your laptop may get hot for several different reasons. Here are some of the most common:

Additionally, some laptops just naturally heat more than others. Either way, any amount of heat sitting directly on top of your developing fetus for an extended period can be problematic and is best avoided if at all possible.

Another problem is with posture, and this one doesn’t simply apply to pregnant women.

Is It Safe To Use an iPad or Tablet When Pregnant?

It is safe to use iPads, tablets, and eReaders while pregnant. The amount of radiation they put out is low and generally harmless to humans. However, as with laptops, you should avoid putting them directly against your stomach and limit the amount of time you spend on them each day.

Countless studies have been conducted to examine whether or not tablets, cell phones, laptops, and other electronic devices negatively impact developing babies while they’re still in the womb, but none have determined anything conclusive.

Luckily, this doesn’t mean you have to give up your computer-based jobs or favorite forms of entertainment. You just need to limit the amount of exposure you have each day, and again, be sure to keep the devices away from your body, no matter what type of electronics they are.

Furthermore, none of these guidelines apply strictly to pregnant women. Even the FDA encourages people to hold their cell phones away from their heads when talking to them to reduce their exposure to radiofrequency waves (source: U.S. Food and Drug Administration).

Laptop Radiation and Pregnancy: Should I Worry?

You don’t have to worry about laptop radiation while pregnant any more than you would worry about it while not pregnant. Laptops do emit radiation, but it’s radiation that is generally safe for humans.

Again, I’ll refer to Dr. Christopher Baird’s West Texas A&M column. In it, he breaks down all the different types of radiation your laptop emits:

It’s important to note that all of these different forms of radiation are standard, everyday forms that we encounter all the time. They are considered “safe” radiation. This is in opposition to high-energy radiation types, which are unsafe (or unsafe in large doses) for humans. High-energy, unsafe types of include:

Most sources agree that your router is more problematic than your actual devices, and even it is considered safe. However, it would be best if you didn’t sleep with it right beside your head.

Carrying a Laptop Bag During Pregnancy: Is It Safe?

Perhaps unsurprisingly, there isn’t a lot of scientific research that backs up whether or not carrying a laptop bag while pregnant is safe or not. However, on her website, Manhattan Midwife, proprietor Risa Klein (N.P., M.S.) interviews a 20-year chiropractor, Dr. Rob Shire, on the subject.

Here’s what he had to say (paraphrased):

If you’re pregnant, you shouldn’t wear backpacks or use heavy laptop bags. Instead, use a rollaway pack to carry your items, whether that’s a laptop, heavy textbooks, or something else (source: Manhattan Midwife).

Backpacks and heavy shoulder tote bags can put extra strain on your back, spine, etc. Dr. Shire also advises against carrying toddlers on your back while pregnant, which some moms, particularly single moms, sometimes do, at least early in their pregnancies.

Backs may not take the hardest hit when it comes to pregnancy, but they definitely take a hit, so do whatever you can to minimize the strain you put on yours.

I hope this article has helped you feel less nervous about using your laptop and other devices while pregnant. Good luck with your pregnancy!