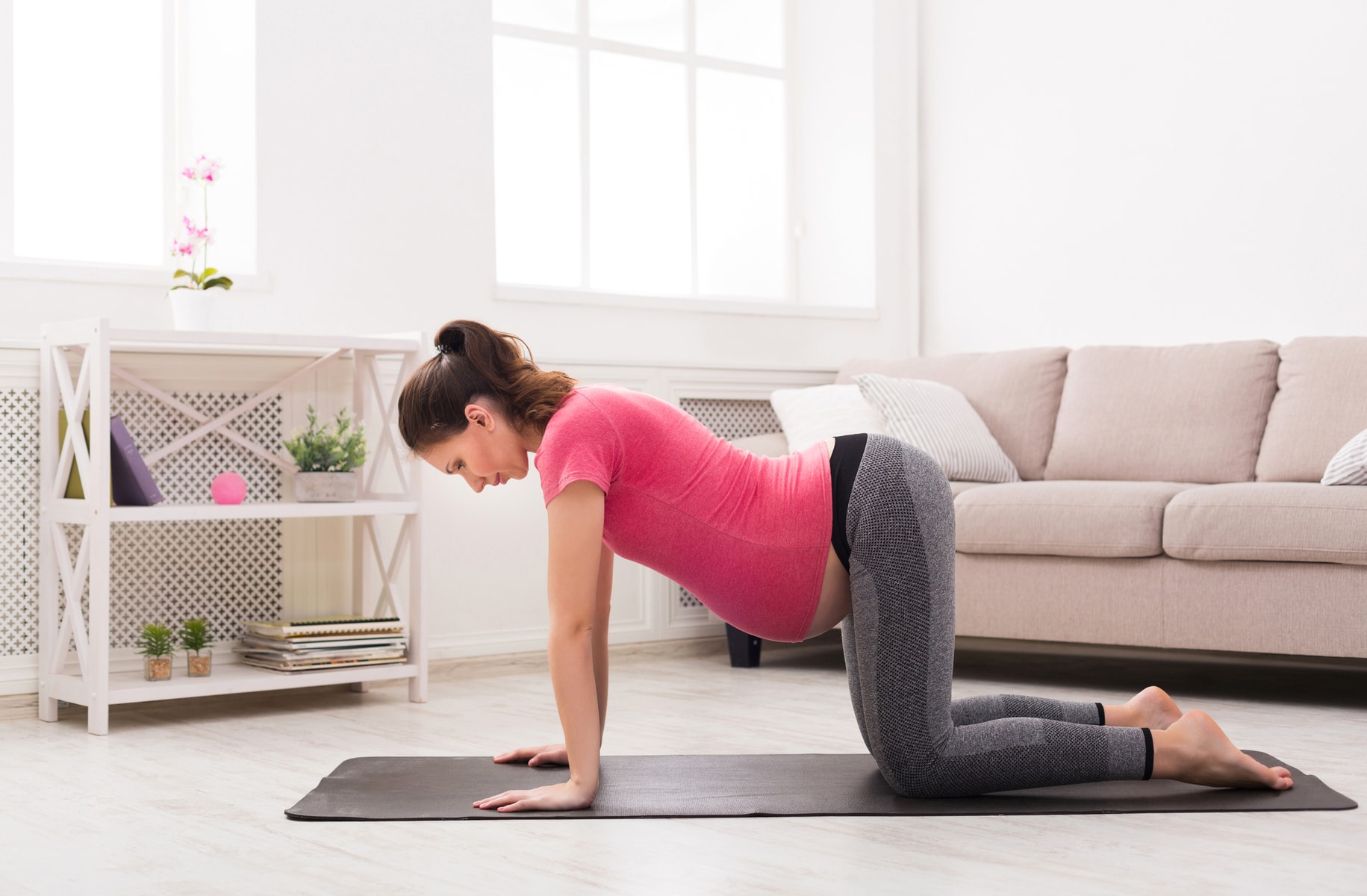 The closer pregnant women get to that 39- or 40-week point, the more they start contemplating how to induce labor so they can meet their babies at long last. In recent years, the Miles Circuit has become a popular method for many women, but what is it? And does it actually work?

The Miles Circuit is a three-step process that’s supposed to help induce labor. The first two steps are a series of positions that pregnant mothers are supposed to hold for 30 minutes each. The third step involves 30 minutes of stair climbing, curb walking, and other specific forms of movement.

The idea behind the Miles Circuit is that it’ll help move your baby into the proper position for giving birth. Keep reading to find out more details about the Circuit’s three steps, whether or not the Miles Circuit is safe, its success rate, when you should start it, and other pertinent information.

What Is the Miles Circuit Method for Inducing Labor?

The Miles Circuit is a method for repositioning babies. Created by Sharon Muza, DONA-Approved Birth Doula Trainer, and named after her friend Megan Miles, the Circuit’s goal is to get a baby in the so-called “optimal” position for childbirth, also known as the Left Occiput Anterior or LOA position.

However, Muza and many other women claim that it can also help jumpstart labor (source: Miles Circuit).

One day, Muza was working with an expectant mother whose labor had stalled. She called her friend, Miles, and the two of them brainstormed yoga-like positions that might help restart the mom’s labor. The positions worked, and the Miles Circuit was born.

Ever since Muza has been using it with all of her clients. She’s also been sharing it with the world via her website.

As of now, there’s no scientific evidence that the Miles Circuit works. However, some doctors and hospitals encourage patients to try it both to alleviate back pain and help in situations where labor has stalled (source: University of South Florida Health).

Does the Miles Circuit Work? How Effective Is It?

There’s no scientific evidence to prove the Miles Circuit is effective at jump-starting labor. However, there’s plenty of anecdotal “evidence” from women claiming that it helped induce labor during their pregnancies. It’s up to individual women to decide how much stock they put in these claims.

I’ve already mentioned that it’s a three-step process that’s supposed to get your baby in the correct position for birth, which can potentially induce labor.

Before you start, make sure you go to the bathroom. You know how often you have to tinkle when pregnant, so go ahead and get that out of the way so that you’re free for the next 90 minutes.

Most importantly, grab your partner or a friend who can be with you if you need them. You’ll also want water in case you get thirsty and pillows to help you prop yourself in the correct positions.

When you’re ready to go, here’s what the Miles Circuit is:

Get onto the floor for the first position, “Open Knee Chest.” If you do yoga, this first position is similar to Child’s Pose, with your head, shoulders, and arms on the floor. However, instead of having your hips tucked in, you’ll raise your booty as high in the air as you can get it, keeping your knees spread apart.

Hold the position for 30 minutes.

Either on the floor or after moving to the bed, get into the second position, “Exaggerated Side-Lying.” For this position, you’ll be lying on your left side. Bend your right knee up and bring it up towards your chest. This is where the pillows come in handy, as your right leg needs to be high. Your left leg should remain flat and straight.

Hold the position for 30 minutes.

Finally, for the last 30 minutes, you’ll get up and move around the house. Keep in mind that this should be gentle movement. Do light lunges or try curb walking, and whatever you do, don’t overdo it (source: Miles Circuit).

If you’re still unclear what some of these poses look like, here’s a YouTube video to help you out:

Again, let me reiterate that the primary goal of the Miles Circuit is to get babies into the LOA position. However, babies don’t have to be in the LOA position to be born safely. Babies can be delivered in all kinds of positions, and unless they’re in a feet-first (breech) position, the birth process usually goes smoothly (source: OB-GYN 101).

Many pregnant moms and doulas worry if a baby is in the Occiput Posterior (OP) position, but it’s actually entirely safe (source: MedlinePlus).

And because most positions are also safe, the Miles Circuit’s goal of rotating the baby is entirely unnecessary. However, the secondary goal of inducing labor is the one many women are seeking when they try the Miles Circuit.

There’s also evidence to suggest that lunges, squatting, and the extended Child’s Pose position can help open up the pelvis, get the baby ready for birth, etc.

As Zoe Nokomis puts it in her dissertation, “Walking, swaying, lunging and/or flexing and extending the legs changes pelvic dimensions to facilitate fetal rotation and descent. Such movement also mitigates pain caused by abnormal positioning of the fetus and/or prolonged labor” (source: Western Michigan University).

So, to put it simply, there may not be anything to support the efficacy of the Miles Circuit, but the positions used in the Circuit have quantifiable evidence to support their worth in childbirth.

Is the Miles Circuit Safe for Pregnant Women?

It’s unlikely that anything in the Miles Circuit could hurt you or be unsafe. However, as an expectant mother, you shouldn’t attempt it without approval from your doctor first. If you do attempt the Miles Circuit, you need someone with you and don’t go overboard on the movement part.

The Miles Circuit is really just a combination of positions that most doctors and nurses already recommend mothers do.

Just about any pamphlet on labor and delivery mentions some sort of kneeling position similar to the “Open Knee Chest” position and an extreme side-lying position. Most also recommend walking, lunges, and other gentle movements (sources: University of Minnesota & University of South Florida Health).

In fact, the University of South Florida Health even mentions the Miles Circuit by name in its pamphlet on labor!

However, every woman and every pregnancy is different, so it’s crucial that you not do anything without talking to your doctor about it first. This is especially true if you have any health conditions that could put you at higher risk for a problematic birth.

Although there are no scholarly publications or research studies to prove the legitimacy of the Miles Circuit, you can bring it up in practically any Lamaze or New Mommy class and hear a dozen success stories.

However, if you’d like to read a few testimonials and success stories, you can start by checking out the ones on the Miles Circuit website (source: Miles Circuit Testimonials).

Here are a few other stories about women who had good luck with the Miles Circuit:

All of these are powerful testimonials to how wonderful the Miles Circuit is. Still, again, I urge you to take these as what they are – anecdotal evidence only – and don’t try anything without speaking to your doctor first.

You should start the Miles Circuit at about 37 weeks, according to the two women behind it. Initially, you should perform each stage for only 10 minutes at a time, working your way up to 30 minutes per step as the days progress. However, some women don’t start the Circuit until they’re in labor.

Now let’s look at what doctors have to say about the individual positions in the Circuit.

As for the final step – moving around, doing lunges, etc. – you can do that throughout your entire pregnancy as long as you’re healthy and don’t have any issues that would prevent you from doing mild exercise.

Most doctors highly recommend that pregnant women exercise while pregnant. Expectant moms who exercise are usually healthier both physically and mentally, and their babies are often born healthier, as well (source: Pregnancy and Exercise).

Additionally, doctors recommend lying on your left side as early into your pregnancy as you can start doing it.

Left-side lying is the optimal sleeping position for pregnant women, and it’s also good for your baby. Most professionals urge women to begin sleeping entirely on their sides, specifically their left sides, by the second trimester at the latest (sources: Wake Forest Baptist Health & University of Utah Health).

Propping up the right leg on pillows is also part of that optimal sleeping position.

The kneeling position (Step 3 above) is usually reserved for when labor starts. This position is safe even if you’ve had an epidural, and it can go a long way towards relieving back pain and helping the baby reach the pelvis at an optimal angle (source: University of South Florida Health).

However, that doesn’t mean that the kneeling position is unsafe before active labor; that’s just the time most doctors recommend it. There’s no evidence to suggest that starting these positions at 37 weeks would be dangerous for either you or your baby, but again, speak to your doctor to be sure.

The Miles Circuit vs Spinning Babies

Both Spinning Babies and the Miles Circuit have the same goals, these are:

However, the two methods differ in their approaches to reaching those goals.

The biggest difference – and perhaps the most important one for some moms – is that Spinning Babies is a parenting class taught either in person or via online workshops. Either way, though, expectant moms have to pay money to register for the course.

The Miles Circuit, on the other hand, is something moms can do for free in the comfort of their own homes. All the information on how to do it is listed – free and available to all – online.

Both use some of the same techniques and yoga-like positions that are supposed to help rotate babies in the womb, and both have plenty of success stories you can read about online. (You can check out Spinning Babies testimonials here!)

Before you start either program, though, you should talk to your doctor to ensure it’s right for you and that you are physically sound enough to attempt either one.

If you came here hoping to learn more about the Miles Circuit, I hope I was able to answer all of your questions and tell you anything you needed and wanted to know. And although I’ve already said it a few times, I want to urge you one last time to talk to your doctor before trying the Miles Circuit for yourself.